Players, conductors, committee members and supporters of Newland Concert Brass are deeply shocked and saddened by the passing of the band’s president Jim Walker MBE.

Jim was a true gentleman who worked tirelessly for the band, serving on Newland’s committee since the band was founded in 1987.

Over the years, he served on the committee as secretary and president and always supported - and took a great interest in - all the band was doing. He instigated the partnership between Newland and the Fanfarenkorps Neheim-Hüsten in Germany’s Hochsauerlandkreis, a partnership that is still going strong after more than 30 years.

Jim and his late wife, Nancy, accompanied the band to numerous concerts, contests, visits to Germany and to the National Brass Band Championships in London, Harrogate and Cheltenham. He often compèred at band concerts and was particularly proud to be part of the band’s 30th anniversary concert and photo exhibition in 2017.

His local knowledge of West Lothian and its people was legendary and nothing was ever too much of a bother to him. He was a councillor for over 30 years and was involved in many other community groups. He was a past chieftain of Bathgate Highland Games and president of Bathgate Thistle Football Club. He was also elected to the Bathgate Procession committee when he was just 18 and was awarded an MBE in 2014.

He was a deeply committed, dedicated and approachable gentleman who was always friendly and professional. He will be greatly missed by the band, in Bathgate and West Lothian and by friends in Germany.

Newland Concert Brass send their condolences to all of Jim’s family. 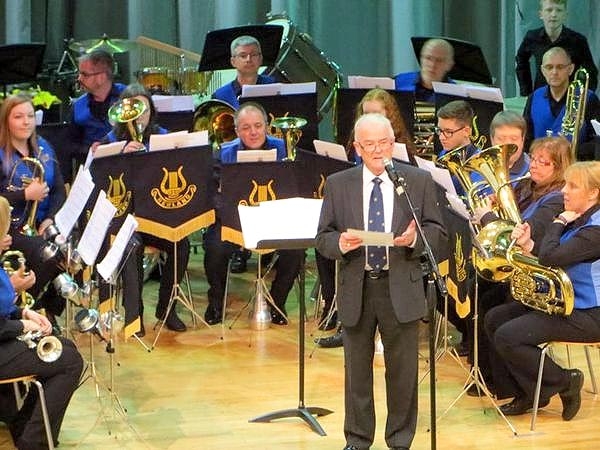