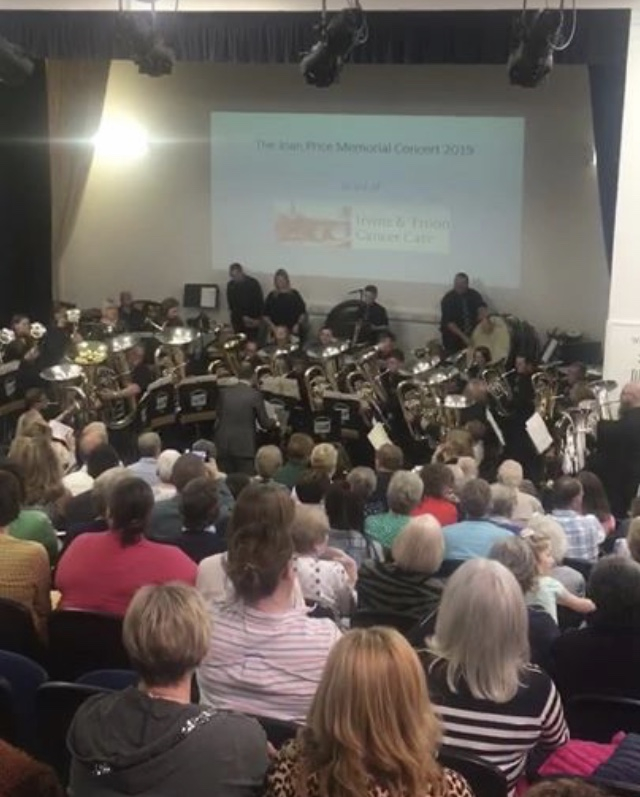 Kyle Academy in Ayr was left ringing with the triumphant sound of brass on Saturday 7th September as the curtain closed on the third Joan Price Memorial Concert.

Kilmarnock Concert Brass, Irvine and Dreghorn Brass Band and Dunaskin Doon Band came together in a joint concert to commemorate friend Joan, who was killed in a head-on collision in January 2017 as she travelled home after a Dunaskin rehearsal. This year, Irvine and Troon Cancer Care were nominated as the beneficiary of the proceeds from the concert.

All three bands performed individual sets covering all genres of music – we heard movie theme tunes, big band numbers, pop songs, traditional music by Ayrshire’s own Rabbie Burns and musical depictions of Vikings and Welsh legends. The finale saw the massed bands perform together bringing the concert to a rousing finish and leaving the wonderful audience on a high note.

The evenings proceedings were expertly presided over by compere Ralph Riddiough. Lewis Bettles directed Irvine and Dreghorn Brass Band, while Scott Walker had a busy night as he took charge of both Kilmarnock Concert Brass and Dunaskin Doon Band.

Dunaskin Doon Band’s secretary, Fiona Waddington, thanked Ricardo Varani at the Forum Café in Kilmarnock for his ongoing support of the event. She said “Every year, the Forum Café generously donate us some of their delicious gelato to sell at the interval – it’s always extremely popular with our audience and this year was no different. The ice cream sales give our charity proceeds a huge boost and we continue to be grateful to Ricardo and his staff for their unwavering support”. She went on “We are also grateful to the various local companies who advertise in our concert programme each year. Their support ensures that every penny raised on the night goes to the chosen charity”

This year, the three bands are delighted to have raised a fantastic £2500 for Irvine and Troon Cancer Care with some money still trickling in.

Fiona finished by saying “Every single person involved in Joan’s concert, from the musicians to the sponsors and donors to the audience members - should feel proud of themselves for their contribution. Since 2017, across the three concerts, around £8500 has been raised for charity in Joan’s name, which is just phenomenal. I believe Joan would be extremely humbled and proud that her name lives on in such a positive way, and she’d be delighted that the monies raised are benefitting people right here, in the community where she lived and worked”

Next year’s Joan Price Memorial Concert is already in the planning stages. If you would like more information or would like to be involved in the event, you can email the band at secretary@ddband.co.uk or follow the bands on Facebook.