In just over a week’s time, three Scottish bands will be travelling south to Cheltenham to vie for the National Brass Band Championships title in three of the lower sections.

Kingdom Brass (1st Section), Annan Town (2nd) and Langholm Town (3rd) have been working tirelessly at rehearsals since the lockdown restrictions were relaxed to put on a show to make Scotland proud.

Sadly, for their own very personal and varied reasons, the five other qualifying bands from the 2020 Scottish Championships have withdrawn from the National Finals at The Centaur at Cheltenham Racecourse over the weekend of Saturday 18 & Sunday 19 September. They are Bathgate (1st), St Ronan’s Silver (2nd), Croy Silver (3rd) and Newland Concert Brass and Kilmarnock Concert Brass (4th).

Langholm will be the first of the Scottish bands to take to the stage on the Saturday with the test piece, Kaleidoscope by Philip Sparke. Playing under musical director Chris Shanks, members have just returned to their traditional rehearsal room in the Town Hall as restrictions have eased, a move which has enabled the band to continue their contest preparation in a familiar acoustic.

This visit to Cheltenham marks only the third appearance by the band at a National Finals and the first time in the 3rd section.

“Following qualification in 2020 the band was always determined to go and, after a year’s delay, we have prepared as best we can, ensuring the band remained safe by providing sanitisers and following the guidelines within our risk assessment,” explained secretary Christine Calvert.

The band first played together following the pandemic lockdown on the 21 May after a 440-day lay-off and has had virtually full rehearsals since then. Rehearsals started off in Langholm Rugby Club’s spectator stand before moving to a disused warehouse in the town.

“The Stevenson Trust kindly allowed the band to rehearse in this spacious accommodation during our build-up to the Nationals,” Christine continued. “The building was ideal with a large area allowing the band to be suitably distanced to comply with guidance for brass playing during the pandemic. Initial outdoor rehearsals at the Langholm Rugby Club (above) were followed by inside a disused warehouse (below) before returning to Langholm Town Hall. 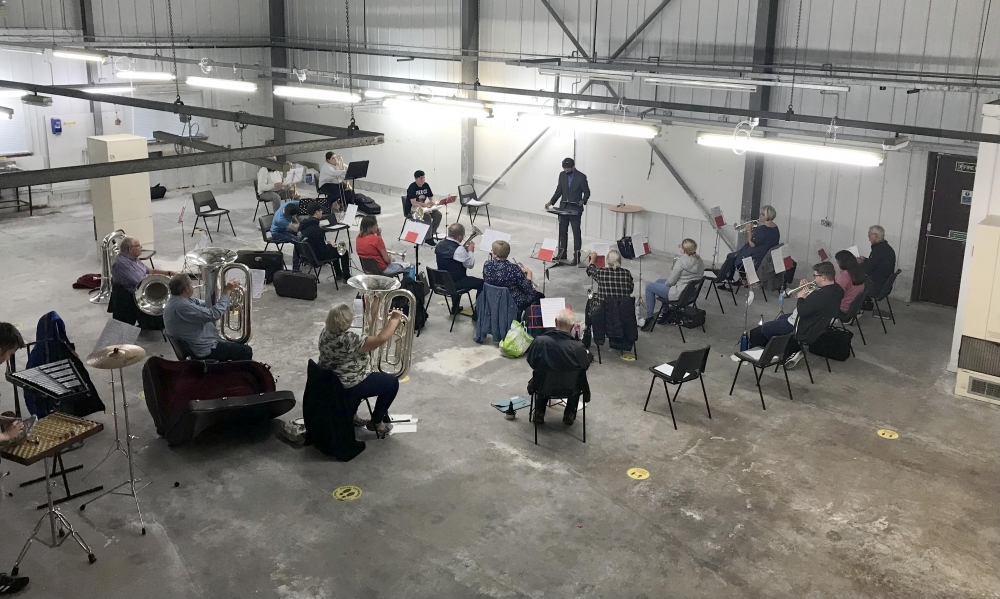 “Langholm’s businesses and individual supporters have been exceptionally generous – as is always the case – and the band is grateful to all who have contributed to make the trip to Cheltenham possible. Without this local support the band could not have attended due to the lack of fundraising opportunities over the last 18 months.”

Langholm Town has players aged between 17 and 81 and prides itself on being a true community band. Players work in a variety of settings including some who provide primary care and education and have been on the front line throughout the pandemic.

Christine added: “We are all excited to be able to get our chance to go to the finals but equally we are very nervous about the challenges of COVID.  Kapitol have provided details of how they will be keeping bands safe and we have also added in our own extra measures for the players.”

Also playing on the Saturday will be Kingdom Brass. The band has been in the fortunate position of being able to restart rehearsals from the end of April, beginning with six socially distanced players outdoors at the Cowdenbeath football club’s Central Park ground, and gradually building up to two groups of six until restrictions on numbers getting together were completely lifted.

“We contacted Fife Council right from the off to get their definitive legal interpretation of the COVID relaxations so that we could stay within the rules,” said Kingdom secretary John Todd.

“It had been 410 days since we had last played together as a band at the Scottish Championships in March 2020.”

The band has been back in its own band hall in Kelty since 10 June, initially at two metres apart and now at one metre distancing, and with other safety protocols in place like face coverings and regular testing. The hall is relatively new to the band and members have had little chance to fully utilise the facilities since they moved in in December 2019, apart from preparing for last year’s Scottish.

But one thing the new premises does have is an up-to-date ventilation system which has proved more than up to the job in keeping fresh air circulating around the room.

Musical director Ian Porthouse has now returned to lead the run-up to the Nationals, taking over from resident conductor Paul Drury who has signed for the band on E flat bass to replace a Kingdom player who is not able to make the trip to Cheltenham.

Musical director Ian Porthouse has returned to Kingdom Brass to spearhead their challenge in the National Finals.

“We’re more or less getting full rehearsals and are now back to meeting up twice a week,” John explained. “We have done a couple of outdoor engagements – at St Andrews and in Kelty – and Ian is happy with our progress on our test piece, Edward Gregson’s Connotations.

“Ian is now up for a full week before we head off to Cheltenham and we’re all feeling pretty good about our chances.”

Having to wait until the Sunday will be Annan Town who qualified for this prestigious event after becoming 2nd Section Scottish champions just before the first lockdown in March last year.

“Rehearsals are going well, albeit still with restrictions. Given the challenges over the past 18 months, our players’ commitment, determination and enthusiasm is absolutely fantastic and we can’t wait to perform on the contest stage once again.”

Resident conductor Simon Railton and musical director Andrew Warriner are both working the band hard on the test piece, Lions of Legend by Thierry Deleruyelle.

Annan Town Band are now rehearsing with Andrew Warriner at the helm.

Due to space limitations, Annan is not yet back in its usual rehearsal room in the town’s Blue Bell Inn and is grateful to the United Reform Church in Annan, the committee of Brydekirk Village Hall and the Corner House in Annan for helping out with providing practice facilities.

“Our progress on the test piece would not have been possible without their assistance and we’re extremely grateful to them all for showing such community support,” added Samantha.

“We would also like to thank the Hollywood Trust and Tesco Groundwork who have awarded us grant funding to help us attend the National Finals.”

All three lower section bands will be flying the flag for Scotland at Cheltenham and the best wishes of country’s brass band community go with them for a successful, enjoyable and worthwhile journey.

Footnote: We shall be featuring Scotland's representatives in the Championship section of the National Brass Band Championships at a later date.