Just Music proprietor Nigel Durno has proved that four into one does go when he recorded himself playing all the parts of Eric Ball’s Quartet for Tubas on a new bass he bought during lockdown last year.

Now the virtual performance has been shortlisted in a worldwide Wessex tuba performance competition – and he’s seeking your votes to push him over the winning line.

As organiser of the Scottish Concert Band Festival, former professional tuba player Nigel had asked concert bands and ensembles from all over Scotland to produce virtual performances for SCBF’s two online festivals.

It occurred to him that having asked many others to create virtual performances, perhaps he should create one himself – entirely for his own gratification and to prove that he was up to speed with the technology and the skills required.

So over a weekend, he performed all four parts of the quartet, playing the Eb and Bb parts on his new Wessex tuba.

It was when Craig Anderson – a former pupil of Nigel’s and now a very eminent professional player himself – saw the video that he encouraged Nigel to enter the Wessex competition which offers a first prize voucher worth £3000 towards the purchase of a new Wessex instrument. 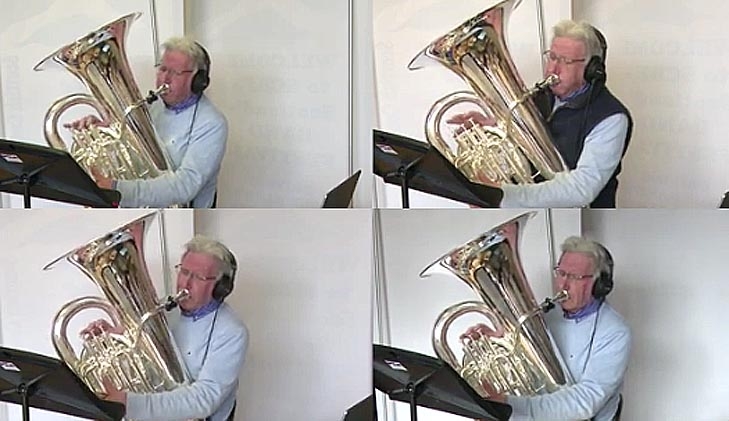 Nigel said: “To my amazement, since the film was never intended to be submitted for an international performance competition, I received an email from Wessex Tubas to say that their panel of judges had selected me as a finalist in their competition.

“Wessex have created a website with all the finalists’ performances on it and the winner will be decided by public vote.

“Should I secure sufficient votes to win the competition, I shall use the prize towards creating bursary to provide a new professional quality instrument for two up and coming young tuba players who intend to make a career in music, but where their family background and finances would otherwise not allow this purchase to be possible.”

To make this dream for two young people come true, go to the Wessex website and in the search box type NIGEL to place your vote. Please share with as many friends and band members as possible – your help could make this happen! Voting closes at midnight on 16 May.