Time for reflection and remembrance at AGM and Learning Festival

SBBA’s virtual AGM yesterday (31 January) was a time for reflection and remembrance.

The occasion, which was broadcast via Zoom, attracted a combined online audience of almost 130 band representatives for the main meeting and subsequent Learning Festival workshop sessions.

The reflection came from president Carrie Boax, who was re-elected to the post unopposed. She told delegates that she could never have imagined 12 months ago, when sharing plans to celebrate SBBA’s 125th anniversary throughout 2020, what the year would truly bring – not only for the organisation, music making and the arts, but indeed for humanity on a national and global scale.

“We had plans full of innovation, promise and potential, hopeful that each month we could reach out and promote all that was great about brass banding, and all that makes SBBA a very special and unique community,” she said.

Carrie summarised the catalogue of disappointments and cancelled events that followed a successful Scottish Championships in Perth in March due to the spreading Coronavirus and recounted how SBBA, member associations and individual bands turned to the internet and online communications to stay connected.

The summer concert of the National Youth Brass Band of Scotland (NYBBS), the virtual Learning Roadshow and the Scottish Youth Festival were just some of the online achievements that replaced planned live events.

“We were able to reach out to a different kind of audience and, whilst very daunting and isolating, able to use social media platforms and YouTube as a platform for sharing virtual recordings,” she said. “2020 was a steep learning curve for so many, digitally upskilling ourselves in ways we never thought we would and connecting with people, sometimes globally.

“To anyone who has in any way given it a go for the sake of our brass band family and the survival of music making, I say a personal thank you. Your contribution has been invaluable, allowing us to develop, grow and sustain our movement during really challenging times.”

Carrie added: “Brass banding and live music making hold such a pivotal place in our culture and society and SBBA will strive to ensure that our COVID recovery plan has our bands and inclusion at its heart.

“I truly believe that, as with all things in life, you shouldn’t wait for the storms to pass, but learn to dance in the rain. Looking forward to 2021, I have kicked off my shoes and am well and truly dancing!”

Because of the extraordinary nature of 2020, the annual awards were suspended – except for one. SBBA honorary vice-president and president of the Kirkintilloch Band, Peter Fraser MBE received the President’s Award for Outstanding Achievement for his 70 years as a stalwart of the brass band community.

The remembrance came at the end of the meeting when there was a moving visual tribute to all those band members who had sadly passed away since the last AGM. Accompanying the photographs and names of the deceased was the hymn The Day Thou Gavest played by the Dalmellington Band. The ‘in memoriam’ can be viewed on the SBBA YouTube channel at https://www.youtube.com/watch?v=OYBpMvKkxok

On completion of the AGM business, five workshop sessions took place throughout the afternoon, the first two of which were conducted by Whitburn Band percussionist Ryan Bradley who, during 2020, has made a name for himself in putting together some stunning virtual performances by his band.

In the one-hour sessions – Virtual Band Performance for the absolute beginner followed by a more advanced tutorial – Ryan took his audiences through the construction of virtual recordings from the mixing and balancing of the individual sound tracks to the editing of the video clips.

In his second workshop, he explained how he considered audio to be a more important component of the performance than the video and that is where he spent most his time, concentrating on tuning, note length, equalising the tracks and adding reverberation to enhance the overall band sound.

Ryan (top right) talks his audience through the mechanics of putting a virtual recording together.

Celebrated trombonist and NYBBS tutor Brett Baker talked about Motivational Practices and Routines During Lockdown in a presentation he had specially prepared for SBBA.

He explained the importance of setting up for practice correctly, selecting the right place with appropriate sound deadening in place. Warming up, he said, was not just about embouchure but also conditioning the brain in preparation for playing.

He used the acronym BRETT as a prompt – Breathing, Rehearsing (warm-up, lip flexing and scales in readiness for practice), Embouchure, Tonguing and Turbulence (keeping the air flowing through the instrument).

Brett ended his session with a list of recommended reading to aid practice, including The Art of Practice by Howard Snell and Preparation, Practice, Performance by Roger Webster. 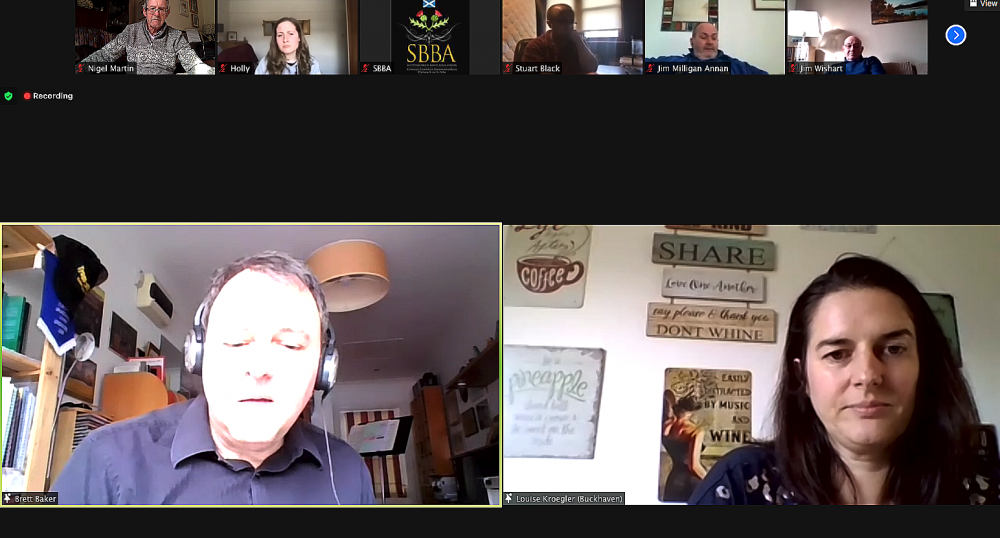 Brett talks to Louise Kroegler of Buckhaven about what to practise and how often.

The fourth workshop of the day – Developing and Supporting Positive Health and Well-Being in Scottish Brass Bands – was presented by Tabby Kerwin and Damian Martin.

This was a topic that was raised as an area of potential concern at the last AGM and was followed up with a workshop with Tabby at the virtual Learning Roadshow later in the year.

Tabby explained that she became aware of a need for mental health support for brass musicians from first-hand experience. In a national survey, she continued, it was revealed that one in four people have some form of mental health issue at some time of their lives. Musicians are three times more likely to experience mental health difficulties.

A series of free workshops is planned for the future to offer training and support to Scottish bands with the aim of having a mental health lead in each band and various support materials in every bandroom.

“SBBA is leading the way with this initiative,” added Tabby, “and I am delighted that the association is on board with our plans.” 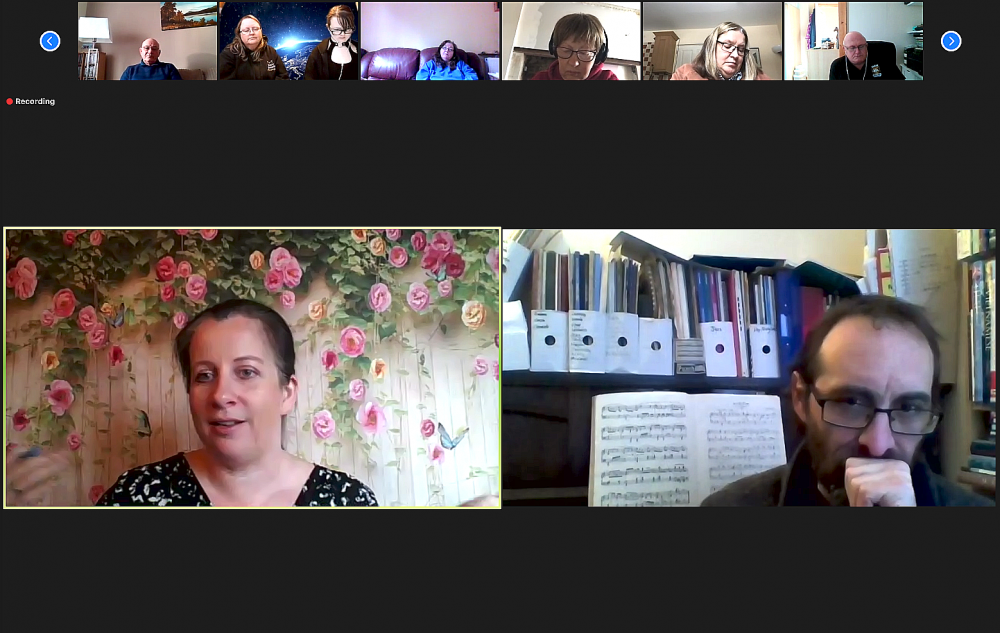 Tabby and Damian explain their plans for a mental health strategy in Scottish banding.

The day ended with a session on Celtic Connections in which SBBA president Carrie Boax was joined by counterparts Allan Davison (Northern Ireland) and Graeme Howe (Wales) to share their experiences within their associations during the lockdown and discuss what has been good, what has not been so good and what the future looks like.

Chairman of the Brass Band League of Northern Ireland, Allan (below) said it had been heartening to see bands from his organisation participating in online events in the UK during the lockdown.

The challenge now would be to help bands get back to playing together again just as soon as Coronavirus restrictions were lifted. To take into account players’ potential nervousness at being thrust immediately back into a competitive environment, he said, they were looking at staging festivals rather than returning to contesting straightaway. 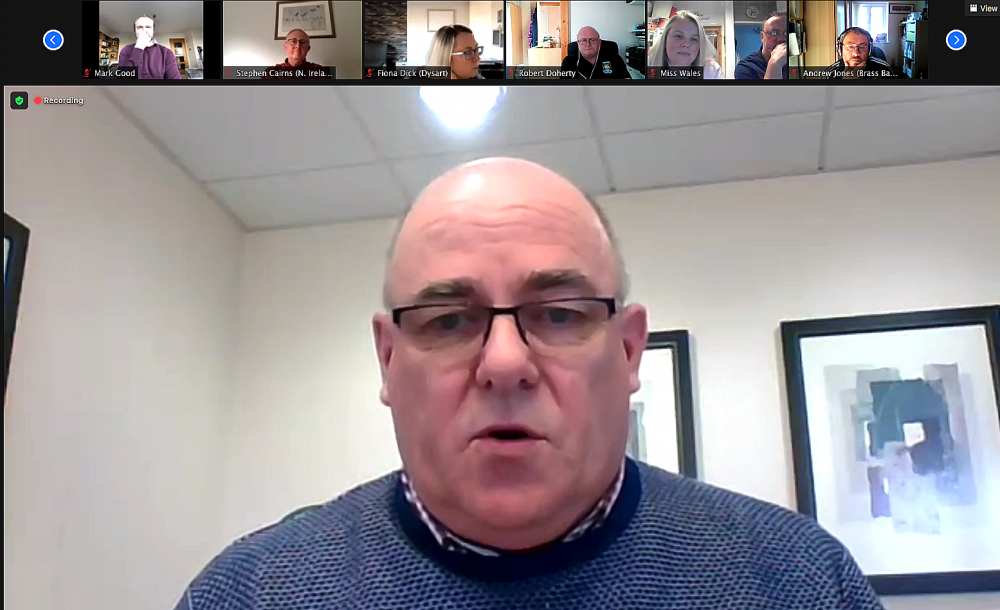 Graeme (above) explained that Brass Bands Wales was a newly-formed organisation to provide a single voice for Welsh bands. The intention was to come out of the pandemic stronger than when they entered, he said, and they had a 10x10x10 strategic plan covering ten weeks, ten months and ten years.

“There is a nervousness at returning to rehearsals and being performance ready again,” he acknowledged but on the plus side, he said online events had knocked down social barriers and had created more accessibility.

“Despite the challenges, we are taking very many positives into the future,” he added.

Carrie reviewed SBBA’s 125th anniversary year and talked with pride about the events that had been staged, albeit virtually, to mark the milestone.

“Being band ready is an issue we have already touched upon,” she commented, “and we are making plans to support bands in whatever way we can when the time comes to return to the band halls.”

Youth development is also a priority and NYBBS is an integral part of the outreach, support, training and collaboration that is needed to enable youngsters transition from grass roots learning into senior banding and beyond, Carrie said.

NOTE: You can now view the workshops on the SBBA YouTube channel at https://www.youtube.com/channel/UCc2dVw33bixud11Pe5LqaZg