SBBA president Carrie Boax took the opportunity to question Fiona Hyslop, Scottish Cabinet Secretary for Economy, Fair Work and Culture, live on television as part of a debate on the effects the Coronavirus restrictions are having on people’s lives and livelihoods.

Carrie was appearing on BBC TV’s Debate Night show alongside a cross-section of viewers from Ayrshire who were concerned about the way the current COVID-19 measures are impacting them professionally, personally, academically and socially.

Speaking as a parent, SBBA president and a teacher, she told Ms Hyslop that a Government response was urgently required on allowing amateur musicians to resume playing, especially in the wake of last weekend's publication of the Music Education Partnership Group report into the aerosol effects of playing a brass instrument.

“At the moment there’s no brass, woodwind, bagpipe playing or singing in schools,” she said, expressing concern for the effect it was having on youngsters and the arts.

“When is this issue going to be looked at? We are really desperate for guidance and advice from yourselves.” 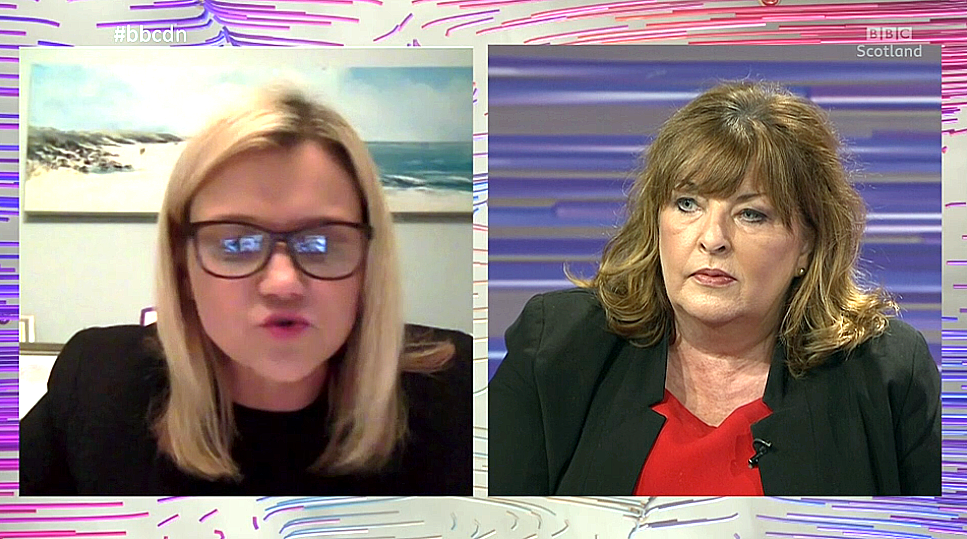 However, it was at this point that debate host Stephen Jardine intervened and switched the discussion to the general topic of mental health and wellbeing without allowing Ms Hyslop to respond directly.

One viewer of the programme, Whitburn Band chairman Charlie Farren, who has already spoken out about how not meeting up with his band has affected him personally, commented afterwards: “I was so disappointed. The host beautifully deflected and no answer was offered or attempted. Another bucket of sand our elected officials choose to bury their heads in!”

This episode of Debate Night is available on BBC iPlayer.