Like many other brass musicians throughout Scotland, Lochgelly Band would have been playing at their town’s Service of Remembrance on Sunday. However, due to COVID-19 restrictions, this will not be possible this year, so instead they have put online a moving tribute to all the people who have given their lives in service of their country.

You can view their performance on YouTube at https://www.youtube.com/watch?reload=9&v=PciY1iHowok

The band plans to offer the recording to the local Legion for use in their own virtual events.

Lochgelly has been one of the busier bands throughout 2020, despite being unable to meet up in person since the Coronavirus lockdown took effect just after the Scottish Championships in March.

So here is an account of how Lochgelly does lockdown: An insight into how one band has embraced the challenges brought on by the COVID pandemic and managed to stay social – but by no means distant.

Fresh from the stage at Perth Concert Hall, the band – having just secured promotion to the 1st section – were already in planning mode for the remainder of 2020 and beyond. From the Scottish Open test piece selection to the logistics of a busy Christmas calendar, they were a band that was all set to ensure 2020 was ‘their year’.

As has been the case for so many brass bands, with the majority of the usual activities and engagements cancelled, the task of keeping the music alive and the players engaged presented an entirely new challenge.

With the added complication of being a band whose players come from as far south as the Borders, as far west as Oban and as far north as Dundee, keeping the community of musicians connected has required more than a modicum of creative thinking. And yet, even with all of these difficulties, Lochgelly have found time to have fun, to develop musically, and even gain some competition success against an international field.

Keeping the team together…

A key component of Lochgelly’s continued success and growth has been the desire to meet up and have fun together. Thanks to the ingenuity and organisation of various band members, games and quiz nights have been a roaring success combining intellectual versatility and comical production. The band have come together to watch live streamed musical events and sometimes, just meet up online for a chat into the wee small hours (beverages optional of course!)

Lochgelly haven’t been afraid to enter into the world of video performance and the growth in production quality and musical difficulty has been a marker of the rising confidence in the band’s ability to produce good music through a different medium. 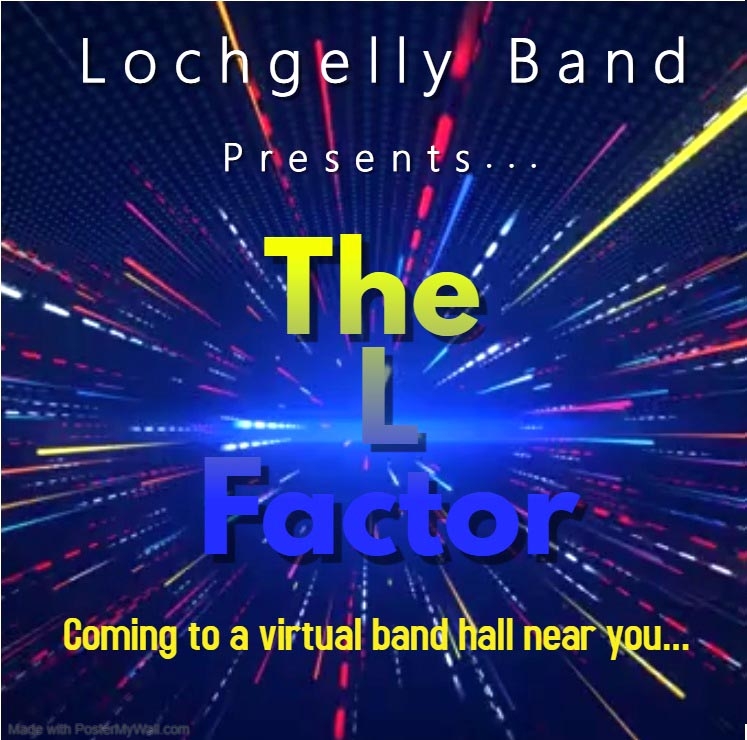 It all started with the supremely successful ‘L Factor’, an internal solo and ensemble competition which saw band members put together their own teams and videos of music that ranged from classical to pop. The enthusiasm to perform has been one of the real highlights of Lochgelly’s lockdown experience and the inclusivity of the programmes undertaken has meant that anyone who has wanted a chance has received it.

What soon became clear was that the band had a technical wizard in their midst waiting to take centre stage with his video editing and compilation skills… step forward Keven Anderson.

Following on from the L Factor, the band created a series of video performances with Keven providing arrangements of the jazzy Isn’t She Lovely, the soulful Crazy Little Thing Called Love and the pure comedy of YMCA.  The band also released a poignant Nimrod as a tribute to VE Day, all videos skilfully crafted by Keven and released on the band’s online media, the results of which even made a virtual appearance in the VE Day celebrations of the South African Legion. 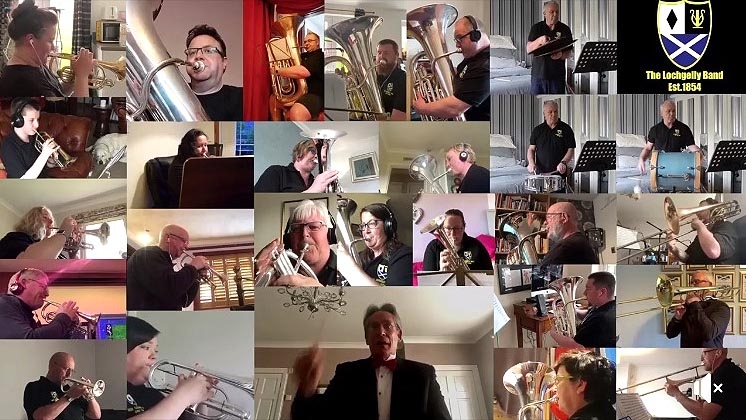 Of course, whilst personal practise and private performance are key in any band experience, we are still a movement that thrives on competition and challenge. There have been a number of opportunities for the band to test its mettle, starting with the Fodens virtual Whit Friday contest, in which Lochgelly performed The Contestor – a tricky little number that tested the individual prowess and skills of players (pictured). An overall 34th out of 90 entries wasn’t just a very respectable result that saw the band take a few higher section scalps, but it saw Lochgelly finish second in the 2nd section and placed the highest of the Scottish entries in the contest.

That contest experience would prove vital as the band would then make the bold decision to enter the Cory Online Brass Band Championships, an entertainment contest that drew entries from around the globe. The 2nd section saw nine bands compete from Scotland, England, Wales and Norway and was a highly competitive field that produced some excellent submissions of high quality. With a programme containing El Es El Senor, Share My Yoke and Balkan Dance, Lochgelly took the prize of 2nd Section Champions and collected trophies for Most Entertaining Band, Best Bass Section and Best Percussion Section.

Following their latest Remembrance tribute, the band intend to start work on preparing a virtual Christmas concert which they hope to share not just online but also with the venues and communities that normally support them during the festive period.

With the life of banding in disruption for the foreseeable future – and with next year’s regionals having been cancelled – Lochgelly are planning for their future based on what has been achieved so far, so the hard work continues.

The band wish to thank everyone who has been involved in their progress and development during what has proved to be one of the most challenging periods in brass band history – from the committee, MD Paul McKelvie OBE, Keven Anderson and resident Zoom and quiz masters to the players themselves whose level of commitment to the cause has been remarkable and something to be very proud of

Of course, further thanks go to those who have supported the band throughout lockdown – from the online community (banding and beyond) to the many neighbours who have endured countless outtakes that led to the final performances.

The kinship of Lochgelly Band hasn’t just survived, it has flourished with each text, each Facebook or WhatsApp message and each Zoom meet-up. What the band have achieved in the past eight months gives great reason to be optimistic for the future and we hope by telling our story, we can give hope and perhaps even a little inspiration to our fellow bands in these unprecedented times.