The Scottish Youth Solo & Ensemble Finals were held at the Howden Park Centre in Livingstone on Saturday 8th February. Despite the best efforts of Storm Ciara, a healthy field of intrepid competitors and their families nonetheless made it to West Lothian, as the best of young Scottish brass players assembled in their bid to become national champions.

Each of the performers had booked their place in the finals through their local association qualifying contests, and with three different age categories to be settled (Junior, Intermediate and Youth), there was plenty to keep both audience and the adjudicator for the day, Owen Farr, entertained.

The first into the spotlight were the Junior section, for players aged 12 and under. There was a definite family feel to proceedings in the Solo category, with Stranraer brothers Aiden and Lewis Miller picking up second and third places respectively. Also competing (on their birthday!) were Dalmellington twins Robert and Adam Riddiough, and there was to be the perfect gift for Bb bassist Adam as his spirited ‘Carnival of Venice’ took him to the Junior national crown.

As dad Ralph explained: “I was delighted when both twins qualified for the final, and we were all amused that it happened to fall on their 13th birthday. With Robert having won the West of Scotland heat and Adam having qualified in 4th place, it was a bit of a role reversal today with Adam coming first and Robert just outside the top three. It was a great testament to them, and to their love of brass music, that they were prepared to sit in a dark hall in Livingston on the day on which they became teenagers, and put themselves through a solo competition. I was extremely proud of them both.”

In the Junior Ensembles contest, the indefatigable Stephanie Mitchell led no fewer than three Campbeltown Brass entries, with the ‘A’ team coming out on top ahead of the ‘B’ and ‘C’ groups. Their winning programme of Alan Fernie’s ‘Stål Himmel’ and ‘Prismatic Light’ had a full, warm sound and a tightness of ensemble that belied the young age of the players, and it was no surprise that it found full favour with the adjudicator.

Owen Farr himself was certainly impressed with the overall standard in all sections, commenting “There was a real musical maturity to so many of the performances today, which was great to see at this early stage in these players’ musical lives”. Indeed, onstage nerves were surprisingly little in evidence throughout the day, allowing for performances of genuine musicality, not to mention the showcasing of some prodigious technical skills.

If the pressures of a national final were weighing on inexperienced shoulders, the youngsters certainly weren’t letting it show. Which wasn’t necessarily the case among the supporting audience, as Ralph Riddiough noted: “Solo competitions are great - we all love them!  As kids we cut our teeth as players on the highs and lows of solos at festivals, slow melody competitions etc and wondered why our parents in the audience seemed so pale and fraught.  As parents of young players, we feel that pain and relive those moments. I can't speak for anyone else but my nerves were shot to pieces!”

In the Intermediate section for players 13-16, there was to be further success for the Campbeltown contingent, as young tenor horn talent Andrew McMillan took the national Intermediate Solo title with a sparkling performance of Philip Sparke’s ‘Masquerade’. Irvine and Dreghorn’s Charlie Boax earned the runner-up spot, with third place going to trombonist Alix Bailey of Broughty Ferry’s Grove Academy.

In the Intermediate Ensembles there were once again three entries all the way from Campbeltown, although on this occasion the ‘A’ ensemble’s second place was as close as they were to get to the title. With Stranraer Brass capping a successful morning in third, it was left to St. Ronan’s Silver under the direction of Gordon Jenkins to storm to victory. Wilfred Heaton’s ‘Scherzo for Brass Quartet’ was a fitting choice for the winners, written when the young composer was aged just 19 himself and playing with friends in a local brass ensemble in Sheffield. The youthful vitality of the writing was on full display here in a performance of class and precision that had the adjudicator reaching for superlatives.

Finally the day’s playing was rounded off with the elite Youth Solo category, for players aged 17-21. Amid some top-notch musicianship, and not a few technical fireworks, eventually it was rising Arbroath baritone star Holly Bennett who took the national laurels. Her stylish rendition of Percy Code’s classic ‘Zelda’ certainly ticked all the boxes for the adjudicator, and was enough to hold off cornetist Iona McFarlane, runner-up on Herbert L. Clarke’s ‘The Debutante’, and Sam Duzinkewycz coming home third with another outing for ‘Masquerade’.

“I’m absolutely delighted to be the 2020 Scottish Champion, and couldn’t quite believe it when I heard my name being read out in first place!” confessed Holly. “This is a huge honour for me and I am extremely grateful to my inspirational teacher and accompanist Mr Michael Robertson.  I’d like to thank Mr Owen Farr for his valuable and encouraging comments today, and all at SBBA for giving young players such as myself the opportunity to be involved with events such as today and the National Youth Brass Bands of Scotland courses. Brass has always been a large part of my life, as the third generation of my family to enjoy this wonderful hobby, and also as a member of Arbroath Instrumental Band. I feel privileged to be part of this huge brass band family!”

Ann Murray, SBBA Vice-President, commented “We’ve had a great day of music making, with players from across Scotland and winners from Arbroath to Campbeltown, and across to the Borders. My thanks go to our adjudicator Owen Farr who ended the day with some very useful tips on solo playing, our compère Damian Martin, and our heroic accompanist Gina Baker, whose sympathetic playing really helped to bring out the best in today’s performers. Thanks also to West Lothian Council for their generous support, enabling us to use this wonderful venue once more”.

The high quality of music on offer from every finalist today underlined perfectly both the strength in depth of young brass talent across Scotland, and the selfless hard work put in by countless instructors, bands and parents behind the scenes.

“It’s been a pleasure and an honour to sit and listen to the wonderful young talent produced here in Scotland” concurred Owen Farr. “I was delighted to see the performers smiling on stage! It was clear that they enjoyed their day, I thought there was a real buzz about the whole event, and a brilliant atmosphere outside the hall with the youngsters getting the chance to meet up with friends from other bands. It’s been a success from beginning to end”. 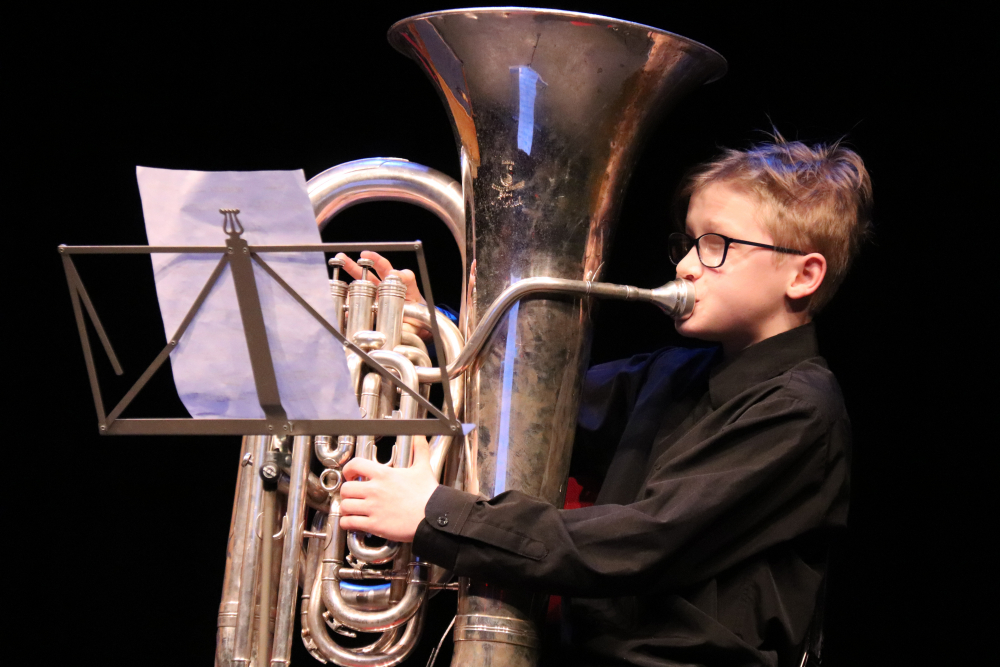