There can be a no more appropriate venue than a football stadium to kick off a full season of activities in celebration of a milestone anniversary of music making.

The Falkirk FC ground provided the familiar backdrop for the annual general meeting of the Scottish Brass Band Association on Sunday 26 January at which delegates were given a preview of the packed programme of planned events for the year to mark its 125th anniversary.

Alongside a new website and increased use of the SBBA YouTube channel, proposals include publication of a special commemorative brochure for the Scottish Championships in March and monthly highlights covering

• Roadshow of Learning (June and September)

SBBA president Carrie Boax opened the AGM by outlining to delegates the achievements and challenges of the previous 12 months.

“We have continued to provide the highest quality of contests for our member and guest bands through the Scottish Festival of Brass, the Youth and Senior Scottish Championships for solo and ensembles and the Scottish Brass band contests in the superior Perth Concert Hall,” she said.

“My thanks go to the tireless work of our players and conductors for ensuring that all of our SBBA events are supported and continue to grow from strength to strength.”

Young musicians were a particular area of focus, she continued, and while grateful to the many financial supporters of SBBA’s work – Band Supplies, Besson, Just Music, Trinity Music, Perth and Kinross Council – it was the £90,000 of funding from the Scottish Government’s Creative Scotland Youth Music Initiative (YMI) programme which had made a real difference.

Developing and supporting 50 Scottish youth brass bands, continuing to build upon the success of NYBBS, training young people as both musicians and leaders, providing professional development for adults working with young brass players and exploring a transition brass band for young people attending further education establishments – these are just some of the initiatives which are currently being undertaken by SBBA.

“The challenges we face are clear,” Carrie pointed out. “We appreciate funding is limited for senior events and contests and cuts in core provision in education continue. However, the solutions are also clear – they are found in the band rooms around the country; they are found in ourselves.

“I have been inspired by the stories of new bands starting, brass groups reforming and players returning. It is definitely not easy, but if you care about our movement – and seeing you all here today shows that you do – then please reach out to the resources and experienced, determined people out there and help to make our movement grow. The rewards will be worth it.”

Carrie praised the support and advice she had received throughout the year from the “reliable, experienced colleagues around me.”

“My sincerest thanks go to my fellow trustees, extended executive committee and our education officer and communications team. Their passion and commitment to the past year’s business and development work ensures the long-term future of the organisation continues to thrive.”

After presenting, and having approved, the annual accounts, Julie Nicoll proposed a change in SBBA’s financial year from 1 August–31 July to 1 April-31 March in order to make managing events and organising and administering YMI activities more practical as they would take place within the traditional tax year.

A regular feature of SBBA AGMs is the presentation of special awards to groups and individuals. 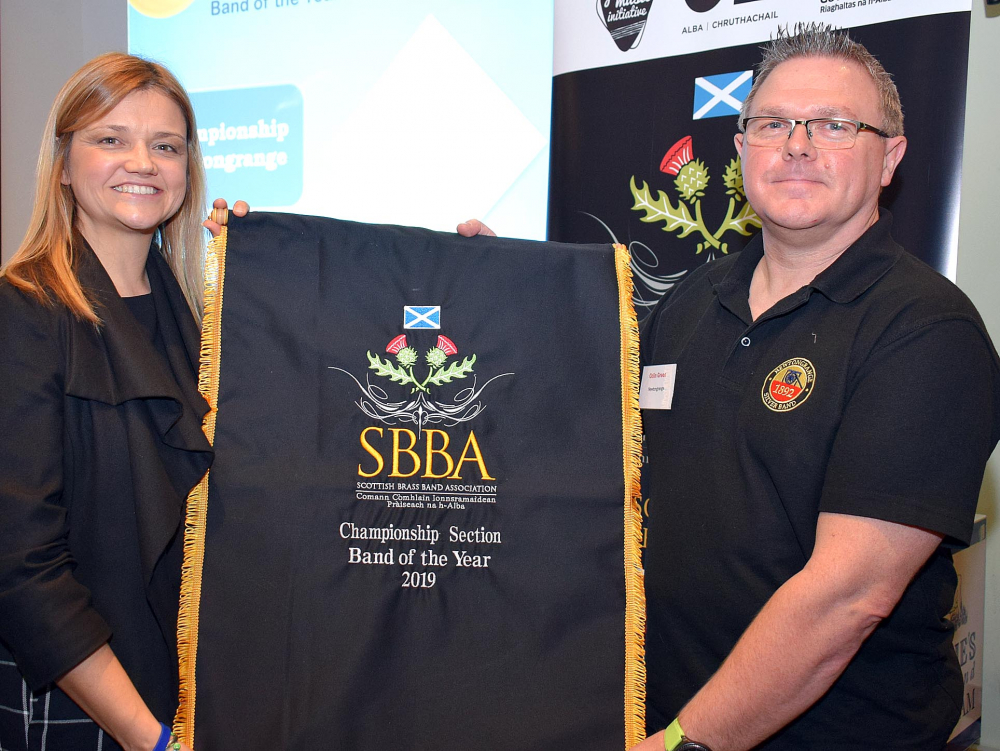 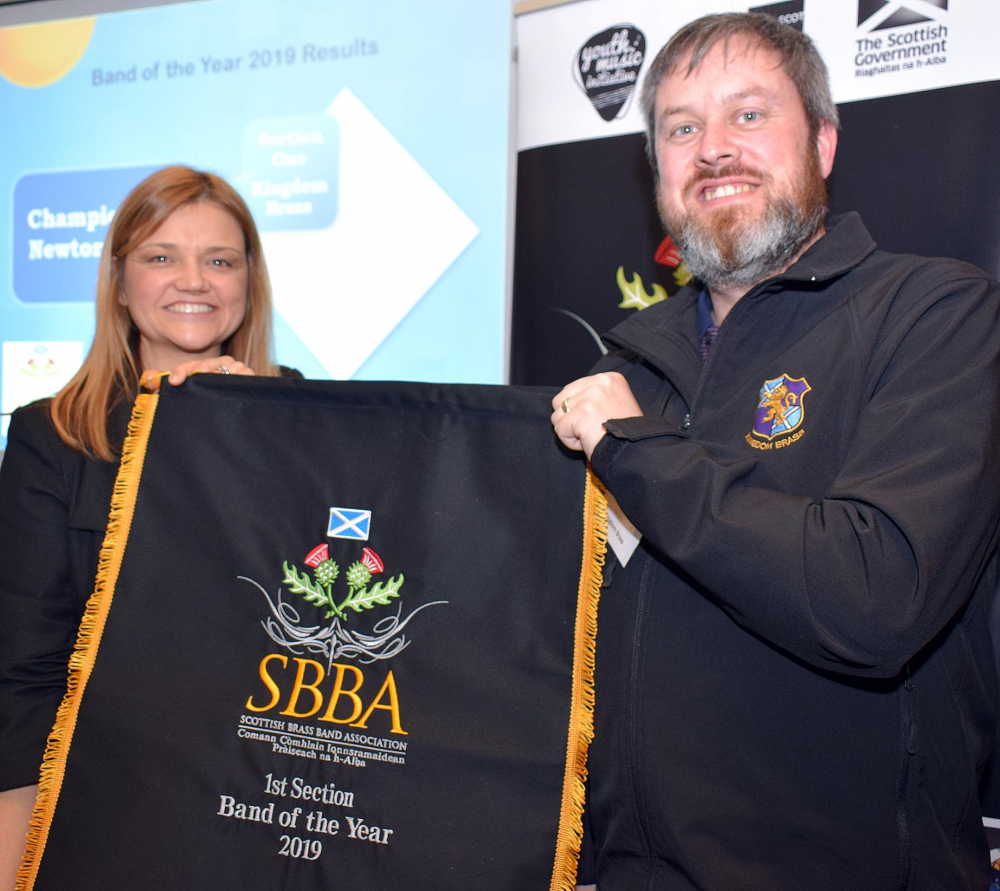 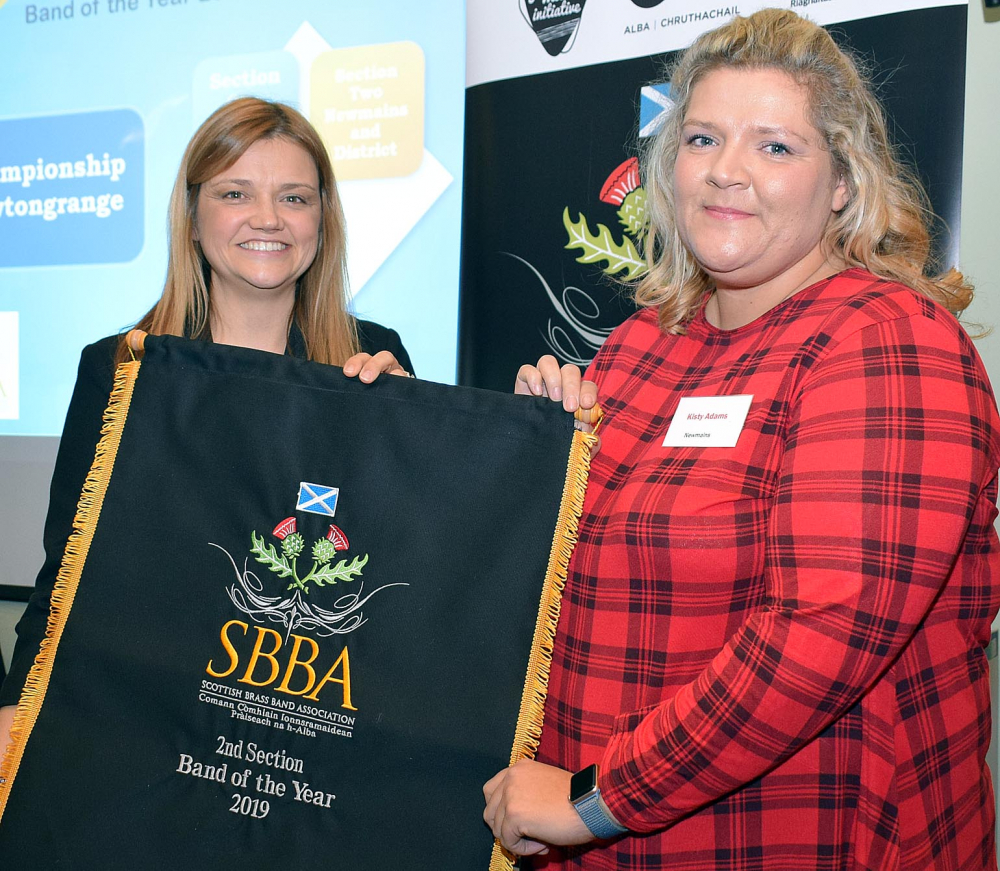 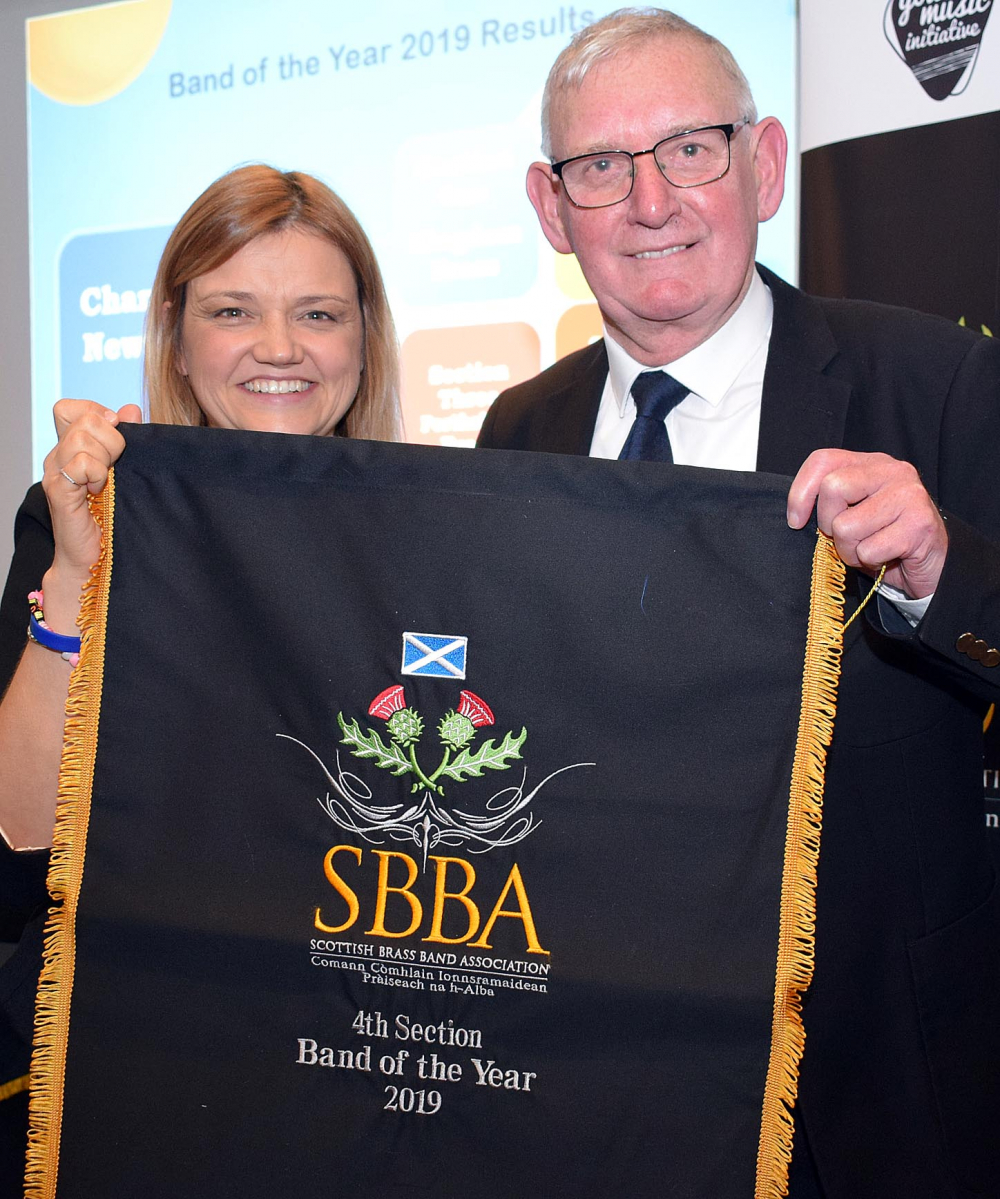 Three recipients of the President’s Awards were announced by Carrie Boax. The first award was presented to Whitburn Band for consistently competing with the best in Britain and Europe and achieving 3rd Place at Albert Hall and 14th place in the ‘band of the decade’ listings on 4barsrest. Unison Kinneil’s award was for surviving the devastation of its band hall fire in 2019, encouraged and supported by generous offers of help from bands and the local community. 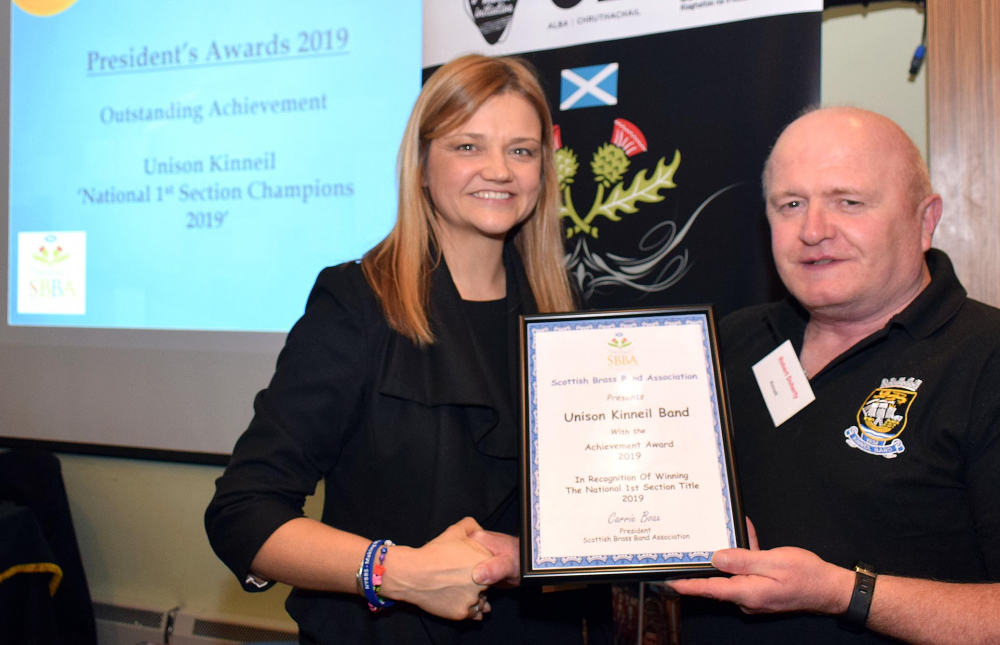 The third award went to Dalmellington Band for its innovative Brassma project in which, with funding from YMI in conjunction with SBBA, it had worked with the local health centre to offer brass tuition to young asthma sufferers. “This has been really positive for both the children and the band and, as a result of its success, the project is to be rolled out and delivered this year,” added Carrie who also left delegates with this parting thought:

‘Take your pride into your bands and leave your personalities and personal agendas at the door. Never forget why you got involved, what makes you smile and, most importantly, be ever thankful and privileged for the amazing opportunities and good people you have met along the way.’

The day ended with a question-and-answer session which raised many valid points about wellbeing – with a focus on mental health – player recruitment and registration, percussion and SBBA events for 2020. All in all a very productive day! 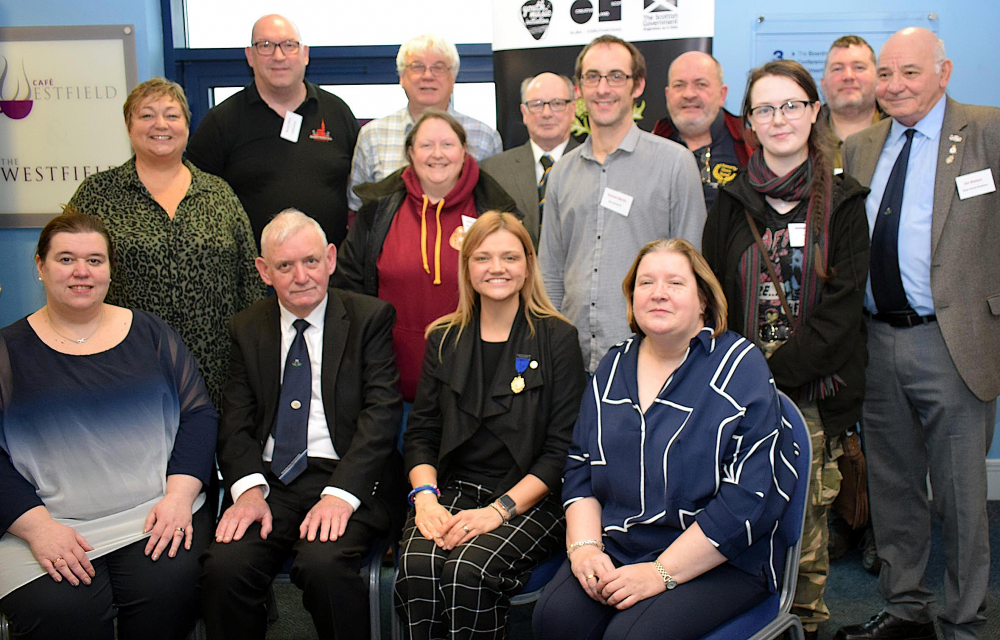 Ann Murray and Tom Allan were re-elected unopposed to the positions of SBBA vice president and
secretary respectively before a new 10-member executive committee was voted in for 2020.

As in previous years, the AGM was followed by a Learning Festival, providing SBBA delegates with the opportunity to broaden their knowledge of band-related topics through a series of workshops.

Nigel Boddice MBE, lecturer in Instrument Performance at the Conservatoire of Scotland, led the session on the art of conducting for players, conductors and band training, working on the three main points of technique, musicianship and psychology.

Alister Cush, chairman of Irvine and Dreghorn Brass, explained how his band had used the Community Asset Transfer process to acquire new rehearsal premises through the development of a business plan and achieving charitable status.

Renowned player, conductor and adjudicator Anne Crookston talked about the purpose of adjudicating at contests, what she listens for in a performance and what will make an impact with the adjudicator, and how she scores what she has heard.

Maths/learning support teacher and cub scout leader Carole Allan’s workshop focused on safeguarding – what it is, who it affects and what are the protocols. She also developed the theme to provide a context for SBBA.

A teacher with the Midlothian Instrumental Music Service, Barbara-Jane Waddell led two learning sessions – one on playing techniques for auxiliary instruments in a band’s percussion section and the other on the effects of dyslexia on music and helping dyslexic musicians of all ages.

During lunch, a group of young players from Abbey Brass in Jedburgh entertained the diners with a short programme of light music, conducted by Stuart Black. Later that afternoon, they assisted Nigel Boddice by performing in his conducting workshop. 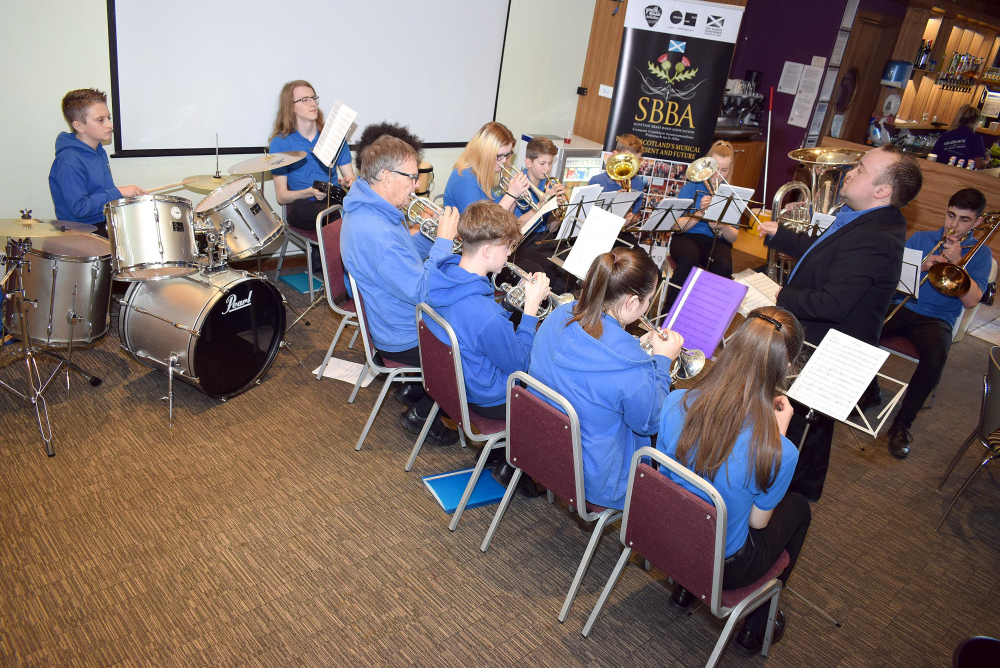