Now in its 17th year, the 2019 Scottish Festival of Brass drew to a close on Saturday 30th November, as twenty-three bands convened at Perth Concert Hall for the Band Supplies Scottish Challenge.

Leading Scottish bands from sections 1-4 were joined by visiting ensembles from England, Northern Ireland and even Germany, in a bid to impress adjudicating team Dr. Brett Baker and Stan Lippeatt.

With bands having been given a free choice of any test-piece by a Scottish composer, there was a great variety of music on show throughout the day, with eighteen different works featured from the pens of Peter Graham, Kenneth Downie, Alan Fernie, Thomas Wilson and Hamish McCunn.

Adjudicator Stan Lippeatt was impressed with the day’s offerings. “I was surprised at some of the tricky choices of music today,” he says, “but also by the high overall standard of playing”.

Brett Baker concurs, “There was a big difference in the difficulty level of pieces between bands, but although they were very different, they were nonetheless mostly very well-chosen. There really were only two or three bands who bit off more than they could chew today.”

“Yes” Stan continues. “But on the other hand there was at least one band that played an easier piece extremely well, and ended up beating ‘bigger’ bands whose more difficult choices didn’t quite convince on stage.”

“It’s a brilliant venue, very easy to hear performances,” notes Brett. “We were looking for bands to send the audience on a journey today, to create some drama, and there was fabulous playing throughout the contest – all of the bands really delivered a performance.”

As well as prizes for the top three finishers overall, there were awards on offer for the highest placed bands in each section. Picking up Best 4th Section Band come results time with their rendition of Peter Graham’s Dimensions were Dundee Instrumental, under conductor Robert McDonald. Band Secretary Lainey McLean commented “We’re delighted with picking up the award today. The day itself was very well organised and the venue lends itself very well to this kind of event. The feedback from the adjudicators was very positive and they gave points for us to work on, which is always appreciated - it’s the only way to get better!”.

A great result for local favourites Perthshire Brass, led by Craig Dennis, saw them lift the Best 3rd Section trophy playing Landscape and Journey by Alan Fernie. “We used this contest to include lots of our fringe players,” explains regular MD George Annan, “with five members making their contest debut and our bass player Craig conducting for the first time. So we’re over the moon with the result and it rounds off a great year for the band. Most of us were already out again doing Christmas jobs by the end of the contest, so watched the results on livestream – there was a big cheer when ours was announced! It was yet another fantastic SBBA event and I would like to thank the volunteer team for being so helpful and welcoming.”

The Best 2nd Section gong went to a delighted Broxburn & Livingston, whose version of Peter Graham’s Prisms found sufficient favour in the box to lift them into fourth place overall. Beaming conductor Charlie Farren was full of praise for his team’s efforts, “I was very proud of the performance the band gave today and particularly happy for our soloists. I asked the players to deliver what we’d worked hard on in rehearsals: a musical performance, full of details and good dynamics, and they’ve done all I’ve asked of them. Prisms is a work that holds special memories personally, as it’s the first test piece I remember from when it was the area test for the Championship Section in 1989, so directing the piece was a bit of a bucket-list wish for me!”.

At the top of the pile, the adjudicators revealed that the top three had stood out from the rest of the field, but although there was a clear overall winner, it had been quite tight between second and third places. In the event, it was to be the day’s two performances of Peter Graham’s Essence of Time that filled the positions, with defending champions Kingdom Brass and Paul Drury having to settle for 3rd place this year, as Northern Irish visitors 1st Old Boys Silver took the runners-up spot.

For the Ulster outfit it was a fitting reward for a long trip, as conductor Stephen Cairns explains, “The band likes to get away somewhere every year, so with no European qualification this time, we thought “Let’s go to Perth”! We’ve actually played here before in the 2014 Europeans, so it’s lovely to be back. I’m really pleased with the performance and it was a great sound in the hall.”

When all was said and done, however, there could only be one winner, and in the end that honour fell to Unison Kinneil conducted by Chris Shanks. With a two-point margin at the top, the band’s performance of Peter Graham’s sprawling Metropolis 1927 was simply in a different class on the day, as Brett Baker explains. “There were some bands today who played easier pieces well, and some who played harder pieces not so well…but this was a difficult piece played very well”.

In addition to the win and Best First Section award there was still more joy to come for Kinneil, as Principal Euphonium Ian Campbell took home the day’s Best Instrumentalist prize. For the band it was a fitting finale to a rollercoaster year that has seen promotion back to the Championship Section and a fantastic First Section National Title at Cheltenham sandwich the tragic loss of their bandhall to fire over the Summer.

“I’m over the moon” says winning conductor Chris Shanks. “The band is such a close-knit community. They have worked incredibly hard throughout a difficult year, always looking to progress, and their musicianship as an ensemble just keeps on getting better. Hopefully this result can act as a real springboard into the Championship Section for us next year.”

Jubilant band secretary Robert Doherty continues “The band are delighted at being crowned the 2019 Scottish Challenge champions. Once again a well-run contest by SBBA in the wonderful setting of the Perth Concert Hall all went like clockwork, and we were impressed how quickly the day went given there were 23 bands involved. The response from the band since the fire in June has been tremendous. Coming off the back of our National title, today’s result strengthens our belief in the progress the band has made this year under the direction of our conducting team Chris Shanks (Resident) and Raymond Tennant (MD). The Best Instrumentalist award for Ian Campbell was very fitting too; Any one of our soloists would have been worthy recipients today, but Ian did a tremendous job on a really challenging part. Chris said we need to step up to the plate in preparation for the challenges we face in our return to the championship section in March, and this piece was chosen with that in mind. We look forward to our return to the top flight, and who knows what 2020 will bring? As the saying goes, you’re only as good as your last outing!”. 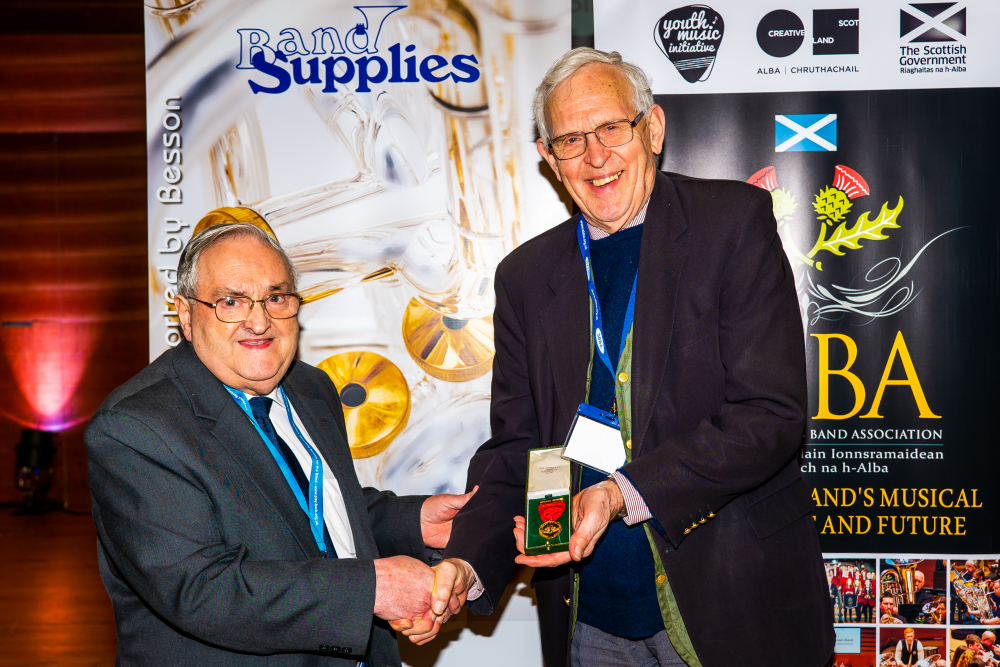 Alongside the main results ceremony, the festival closed with a special award of Honorary Membership of the SBBA to the events’ compère Alasdair Hutton OBE TD. Known to millions across the world since 1992 as the voice of the Royal Edinburgh Military Tattoo, Alasdair is a ‘well-kent face’ in Scottish banding following 15 years of presenting at SBBA events. “I’m quite bewildered!” he commented following the presentation. “For someone who does not play a note of music and has a tin ear this is an extraordinary and quite undeserved honour, but is very much appreciated. Presenting so many competitions and concerts with brass bands over the years, I have learned a lot about the background of the movement and the music which the bands play. It has been a fascinating and most enjoyable experience and I am most grateful to all in the SBBA and Scottish banding for opening the door into this remarkable world and giving me the chance to share so much fun. I am full of admiration for the remarkable work which the Association does, especially in promoting brass music to such a broad swathe of young people across Scotland. It is a privilege to be a ’SaBBA man’ and I shall wear my Honorary Membership medal with pride.”

With 73 ensembles performing over its two weekends, the festival serves to showcase what strength in depth there is in Scottish banding at present. “This is a community celebration of brass and percussion, and about all that’s good in banding” says SBBA President Carrie Boax. “Not just about the top bands, but about the youth, and about the volunteers that keep our bands and contests running throughout the year. I’d like to thank our sponsors Band Supplies and Besson for their continued involvement, and to our adjudicators on both weekends for their helpful, positive adjudication. Perth Concert Hall is a diamond, a world-class venue that’s really appreciated by visiting bands and we’re grateful to the house team here for their sterling efforts. We’ve also received generous support from Creative Scotland and the Youth Music Initiative, enabling us to run workshops with leading clinicians over the course of the festival, and I’m delighted to say that SBBA have been invited once again to apply for funding in 2020/2021,. These funds will also help with the ongoing sustainability of our youth development programme, and indeed it’s been a particular thrill to see some of our new start-up bands competing for the first time in the youth band contest last weekend.”

And so finally, as the bands headed off into the cold evening air it was time to reflect on a hectic couple of weekends. The festival, and its three constituent contests, is clearly popular and well-supported by bands of all ages and abilities, but it did seem a shame that audience numbers, especially today, didn’t always reflect the effort and commitment being put in on stage. With that in mind, it’s over to Ronnie Tennant of Band Supplies for the final words: “We have a great system here in Scottish banding, well-organised and with strong grass roots. But it’s up to us to spread the word.”