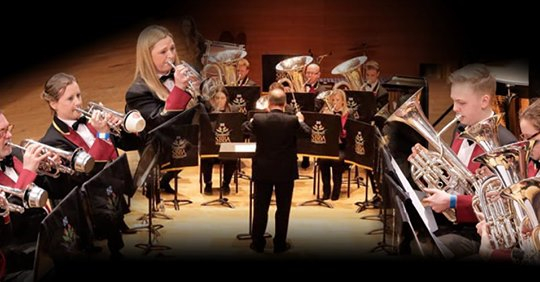 Not long to go now to our first "Headlining" performance at the Festival. We are playing at the Royal Society Edinburgh in George Street on the 20th of August.

Tickets are selling fast so if you want to come along and support one of the "local" bands for the area then act fast! Looking forward to seeing some friends and family there on the night.

Take a sonic exploration through the dark and light corners of music, plus hear your favourite tunes performed with a brassy twist.

As players reached the end of their school careers, many wished to carry on playing and from this, St. David’s Brass Band was formed. The band’s stature grew and in 1998 it won the Scottish 4th Section Brass Band title, from there it has played at many high-key events – including for the Princess Royal in Holyrood Park, and broadcast on BBC Radio Scotland. Players have also triumphed in Solo and Quartet contests and have held the East of Scotland titles on many occasions. In recent years the band has moved between the 1st, 2nd and 3rd Sections of the contesting realm – and in 2017 they competed in Cheltenham at the National Championship of Great Britain, having won Silver at the earlier Scottish Championships.

Now, the community Band is a Scottish Charity, SC028401, run by a committee which is responsible for a Senior and a Junior Band, we have recently moved to new premises in Gorebridge which sees the band finally at home in its own bandhall.