Bands from across Scotland headed to Kinross last weekend, as Britain’s most northerly band association, the Northern Counties BBA, hosted their annual Open Contest. Ten bands took to the stage over the course of the day, with each given twenty minutes in which to impress with their own-choice entertainment programmes.

Adjudicator Alan Fernie admitted to having enjoyed every performance, with each band from Championship to 4th Section bringing something interesting and different to the stage. "I’ve had a lovely, relaxed day”, he said, “with 10 fine bands playing well chosen and appropriate programmes”. Nonetheless, there had to be winners and, he continued, “the top 2 were outstanding, and their mini concerts were each an event".

In the end, it was a jubilant Newtongrange Silver who took the spoils, pushing reigning champions Kingdom Brass into a close-fought second place, and dashing hopes of a third successive NCBBA win for the Fife outfit. 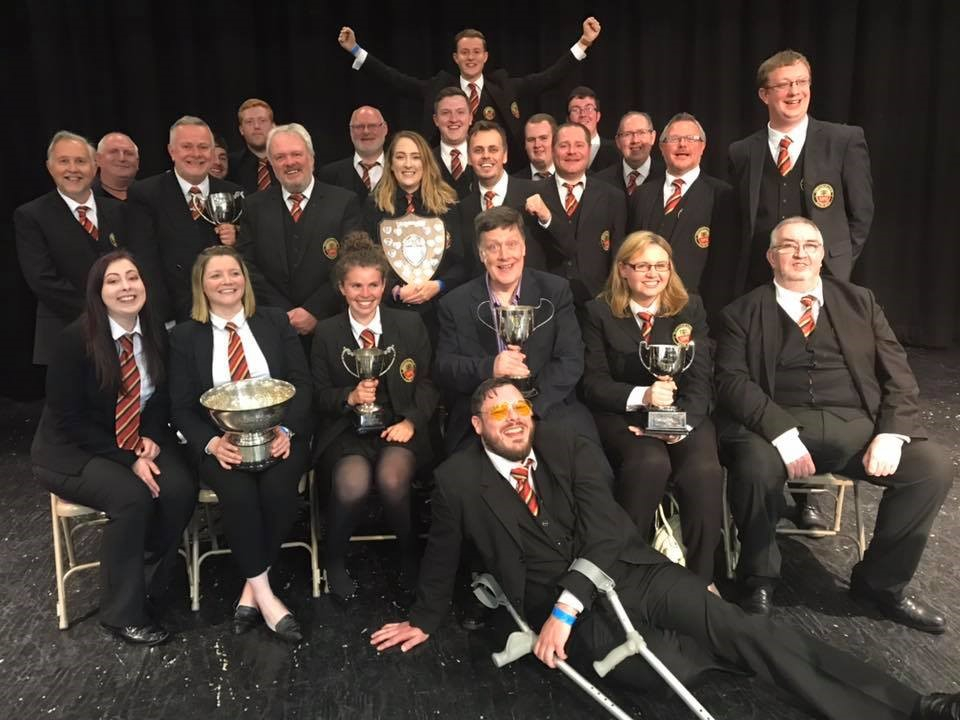 A beaming Newtongrange MD Andrew Duncan commented “It’s been a great final contest of the season for us, and another good indicator of our progress over the past year. It was a tremendous performance from the band from top to bottom today, and just reward for their hard work. The Entertainment format has been an interesting challenge for us, it really forces bands and conductors to think hard about their 20 minutes, and be a bit inventive in their programming.”

In Newtongrange’s case that extra thought clearly paid off on the day, with Alan Fernie awarding the band the Most Entertaining Programme prize. The champions-elect opened their winning set with their conductor’s own arrangement of the march ‘Anchors Aweigh’, featuring a US marching band-style drum line that offered the perfect showcase for the day’s Best Percussion Section award winners. Principal Cornet Angus Edmond starred next with a sprightly ‘Tico Tico’, before Mark Freeh’s fine arrangement of ‘Tonight’ from West Side Story gave way to an exuberant and suitably raucous ‘Balkan Dance’. Finally it was back to both the MD’s arranging skills and the marching drums as the band closed with Randy Edelman’s stirring ‘Reunion and Finale’ from American civil war drama ‘Gettysburg’.

To put the cherry on the Midlothian band’s contesting cake, and up the final silverware haul to six, they went on to add both the Best Non-NCBBA Band and Best Conductor trophies, and also a well-merited Best Soprano prize for end man Gordon Jenkins.

Meanwhile for second-placed Kingdom Brass there was some recompense for missing out on a hat-trick of NCBBA wins by the closest of margins, as the band took home the Best First Section award.

There was also a popular and richly deserved Best Soloist nod for Principal Trombone Alex Philip. This was an especially poignant moment for both the band and many present in the audience, as MD Paul Drury explained:

"Whilst we would have been thrilled to secure a hat trick of victories at this contest, we are satisfied with our 2nd place and pleased with our performance. Sadly it marks the conclusion of an extremely difficult and emotional couple of weeks for the band, following the untimely passing of our amazing principal euphonium player, Neil Philip. It seems totally appropriate that Neil's brother Alex should carry off this prize today on the tune ‘Misty Eyes’. The band dedicates its performance to the memory of an astonishing talent, taken from us far too soon."

Kingdom opened their programme with the bustling theme from ‘Z-Cars’ spin-off ‘Softly, Softly’, then Alex Philip’s award-winning turn led into music from Disney’s ‘Tangled’, with the MD’s own arrangement of the aptly-titled ‘Kingdom Dance’. There was still time left for some ‘Girl Talk’, before the band rounded things off with James Curnow’s triumphant ‘A Psalm of Praise’.

In third place, and also taking home the Best NCBBA Member Band trophy, were Bon Accord Silver under Steve Malcolm. The Aberdeen band’s space themed programme opened with Jacob Vilhelm Larson’s sparkling ‘Ad Astra’, preceding a classy turn from trombone soloist Mark Boyd on the Hoagy Carmichael standard ‘Stardust’ that drew praise from both audience and adjudicator alike. A purposeful ‘Scherzo For X-Wings’ followed, then a beautifully shaped rendition of Ben Hollings’ serene ‘Lake of Tenderness’, before a final descent into organised chaos with the finale from Philip Sparke’s ‘Music of the Spheres’.

Newmains and District, led by the indefatigable Michael Marzella, have had a remarkable few years, earning consecutive promotions from 4th to next year’s 1st Section, with a National title thrown in along the way for good measure. Once more it was another performance to be proud of here for them, taking home the Best 2nd Section award, and coming tantalisingly close to a top three finish with their ‘Reflection and Celebration’ themed set.

Elsewhere, local favourites Perthshire Brass were another band brimming with confidence following a section win at this year’s Scottish Championships, and again impressed in picking up the Best 3rd Section trophy, opening the contest from the number one slot with a cheeky arrangement of the theme to long-running Scottish TV comedy ‘Still Game’. Meanwhile the Best 4th Section trophy went to the Bon Accord Silver ‘B’ Band, with MD Jennifer Cook eliciting plaudits from the box for a “brave” programme that challenged yet still entertained, with young bass star Laura Carter’s bear-suited ‘Bare Necessities’ one of the hits of the day with the audience.

As a full hall gathered for the results, it was down to Alan Fernie to provide the final word on the day’s proceedings. Stepping forward to address the audience, he paused. “Brass Bands are bloody brilliant!”, he said. After a day of friendly rivalries, tears of both joy and affectionate remembrance, and, above all, some fabulous music making across the board, there was nobody in the house likely to disagree.