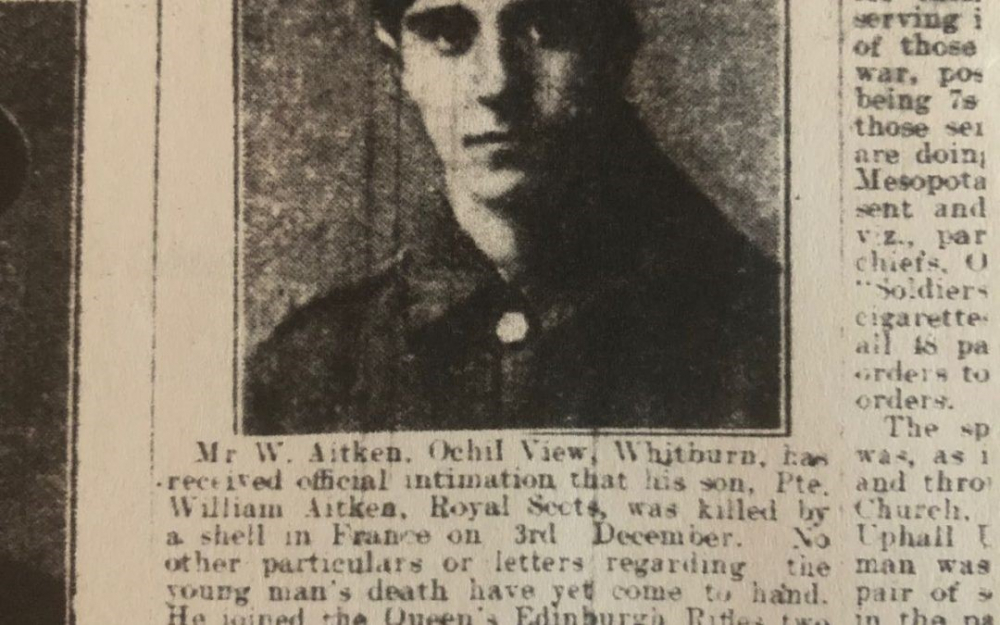 Whitburn Band is appealing for information about a former player of the band that was killed in the First World War.

A shell in France killed Private William Aitken, of the Royal Scots, on December 3, 1917. He was just 20.
In a newspaper report about his death from January 1918, under the headline ‘Whitburn Bandsman Killed’, it states how Private Aitken was “a member of Whitburn Public Band, which he joined when he was 12-years-old”.

He is buried at Duhallow ADS Commonwealth War Graves Commission cemetery in Belgium.
Robert Fraser, who plays Eb Bass with the current band, is working on a major archive project about Whitburn Band in preparation for our 150th anniversary next year.

In June, he is travelling to France to the Battlefield Memorials as part of his work as a brass teacher in schools. While there, he plans to visit Private Aitken’s grave.
Ahead of the trip, Robert would like to speak with any relatives of the former Whitburn player.

He said: “Private Aitken is just one of hundreds of thousands of British soldiers who lost their lives in the First World War.

“Coming across his story has reminded everyone involved in the Whitburn organisation of the sacrifice that bandsmen made at the time, and what that meant for the families left behind. William’s father, also called William, was a member of the band as well.

“The current Whitburn Band will honour one of its own when I travel to France next month and I want to ask if anyone knows of the Aitken family or their relatives to get in touch so they can be part of this time of remembrance and reflection.”

If you have any information, please email the band on whitburnsecretary@hotmail.com or call 07830 515357.