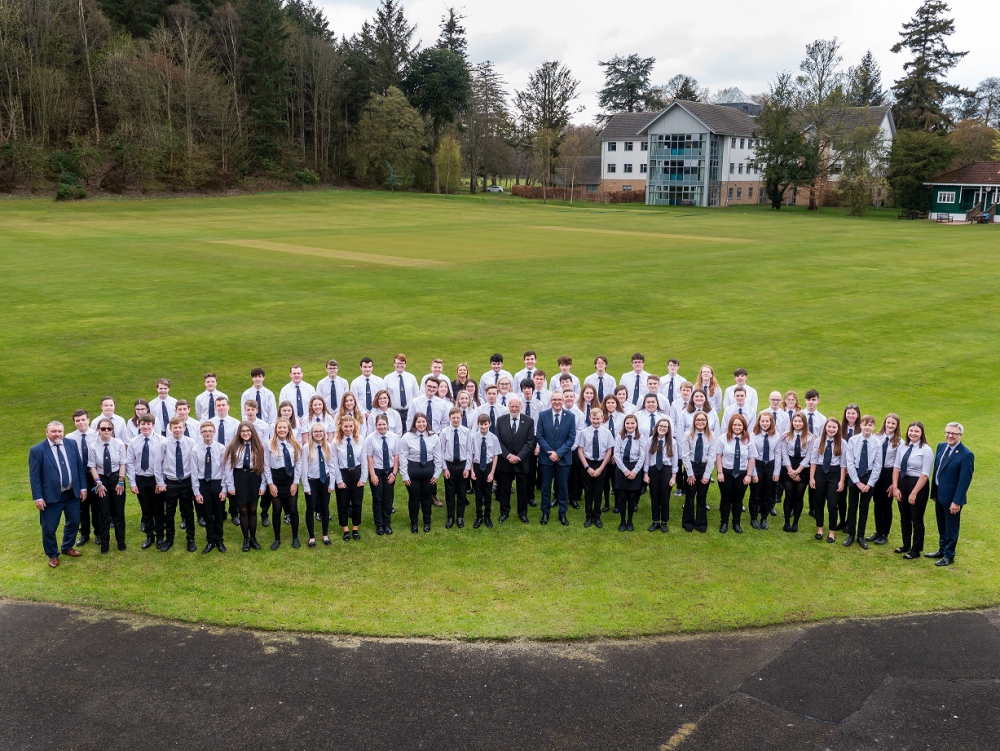 The tranquil beauty of rural Perthshire was shattered for four days last week, as the National Youth Brass Bands of Scotland held their annual Easter course at Strathallan School. Seventy-two of Scotland’s finest young brass and percussion players were put through their paces by new NYBBS MD Ian Porthouse, alongside Musical Director Emeritus Richard Evans, with students representing bands from Orkney to the Borders and some even travelling in from as far afield as England and Belgium.

It wasn’t all work and no play for the students, however. In addition to the hectic rehearsal schedule, there was also plenty to enjoy in their downtime, with social evenings including a rowdy karaoke night, and a quiz won, much to everybody’s surprise, by the front-row cornets!

The packed hall at the end of course concert was treated to a vibrant show, in which the musicality on display belied the limited preparation time involved. As the band filtered gradually onstage to the opening grooves of Reid Gilje’s Blackbird Special, the audience knew they were in for a treat, including the old master himself Richard Evans stepping to the rostrum to lead a serene rendition of the hymn The Lord Bless And Keep You. 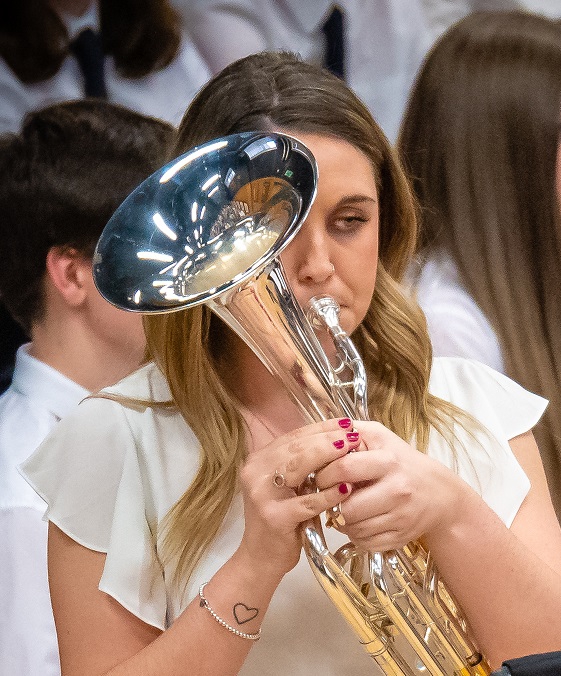 A highlight of the concert for many saw guest soloist Rachel Neil performing the World Premiere of Scottish Rhapsody, a new solo for Tenor Horn and band by Tom Davoren, specially commissioned for the course with assistance from Creative Scotland. Thanks to the marvels of modern technology, the students had earlier been able to gain a unique insight into the thoughts behind the piece, with the composer appearing from New York in a specially made video to offer them a fascinating look at how he had approached the commission.

For the soloist herself, it was a case of the wheel turning full circle, and a great example for the current crop of young musicians of where they themselves may end up in future years. As Rachel explained, “I’ve been involved with the National Youth Brass Band of Scotland for over ten years now, starting on bottom Second Horn, working my way up to section leader, and finally working as a member of House Staff. So to be invited back to perform as guest soloist with the band was a real honour. It was fantastic to work with Ian Porthouse, and especially exciting getting to work once more with Richard Evans, who has been involved with my NYBBS journey since the beginning. It was a performance I won’t ever forget.”

The Easter course serves as a chance for members of both the NYBBS Senior and Reserve bands to play alongside each other as one unit, and gain useful experience for the main NYBBS courses in the summer. As such, and with the cyclical nature of Youth Bands being what it is, the Class of 2019 were, at least on paper, relatively short on experience. However, with a new conductor on board, and a demanding programme of nine pieces to be prepared from scratch for the end of course concert, the youngsters quickly demonstrated that age isn’t everything.

As Richard Evans explained, “With every new NYBBS intake, we are never quite sure how the students will perform. Well this year, as soon as our new Musical Director brought his baton down to start the band we knew we were in for a successful four days.”

“I have been a great admirer of Ian Porthouse ever since the start of his now-famous musical career, when he was just 16 and came to stay with myself and my wife! The students at Strathallan this Easter loved his methods of showing them how to improve their playing, benefitting especially from a session in which he had them singing their parts.”

For his part, Ian confessed to being bowled over by the musicality on show from the youngsters. “Starting a new project with any band is always exciting,  but brings with it an element of apprehension as to what potentially is achievable. I only know this for sure when we begin to rehearse. Consequently, I was delighted that after a matter of minutes the apprehensive feelings were gone, and replaced with thoughts of the limitless possibilities that lay ahead with this talented group of young musicians. Their openness to learn was immediate, and as the days progressed, these young people demonstrated such character and maturity that I was able to work in a totally professional and honest manner, as I would with any top-class ensemble.”

He added, “A highlight for me was the opportunity to work alongside MD Emeritus and close friend, Richard Evans. To see him working with the young players and witness the rapport he has with them reminded me of exactly how I felt Playing under his direction at Cumbria Youth Brass Band and Leyland over 35 years ago. He’s still The Boss!”. 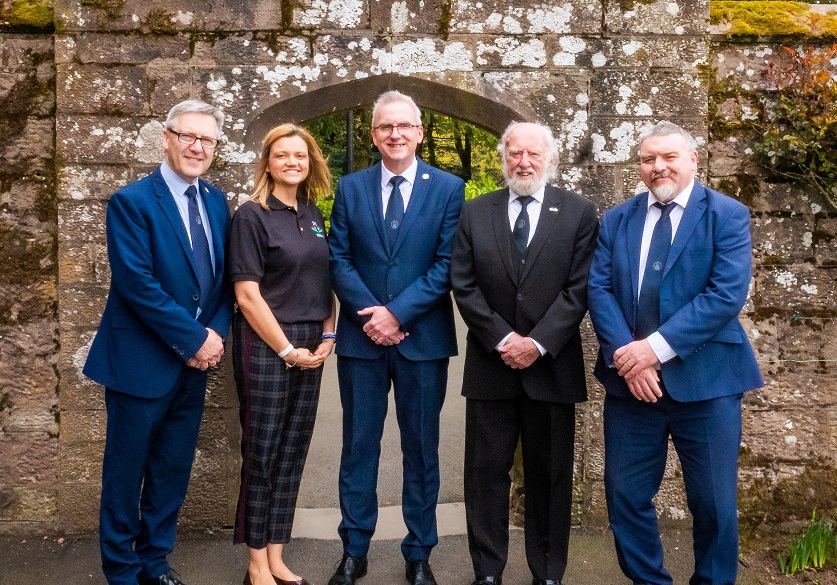 Also working alongside the conducting team during the week were Reserve Band conductor John Boax, and new Children’s Band conductor Alan Fernie, backed up by a dedicated team of ever-patient House Staff, whose hard-work and ability to produce late-night trays of toast at the drop of a hat was much appreciated by the band.

As Ian commented, “Behind the scenes, NYBSS has, in my opinion, the finest management team I have ever had the pleasure of working with. The relationship between staff and students is one of mutual respect, which results in a course that allows the main focus to be on the music, but still allows the delegates to have a lot of fun through well organised social events where their well-being was paramount.  The atmosphere in the rehearsal room was further enhanced by the superb surroundings, facilities and staff of Strathallan School, all adding to the quality of the experience for students.”

“I am very much looking forward to a long and successful relationship with NYBBS where we can collaborate with composers on many innovative artistic projects. Watch this space....”

Six new promotions to the Senior Band were made following the course, and with around 200 students expected across three bands on the summer course, the depth of young musical talent in Scotland is evident. As Richard Evans himself adds, “New Children’s Band director Alan Fernie is a man with a proven record for working so well with young brass players, and the future, with Ian Porthouse on board and the great John Boax in charge of the Reserve Band, is looking very exciting.”

The 2019 NYBBS summer course will run from Sunday 21st to Saturday 27th July, with Saturday performances for the Children’s Band at Strathallan School, and the Reserve and Senior Bands at the Albert Halls in Stirling. A very limited number of course spaces are still available, strictly on a first come first served basis. Application forms and further information on these events can be obtained from the SBBA.

But for now, as the curtain falls on another successful course, it’s left to the inimitable Mr Evans to sum up the week. “The whole four-day course was filled with joy and happiness, and the students were so well behaved.”

“We should be so proud of the whole group…I am.” 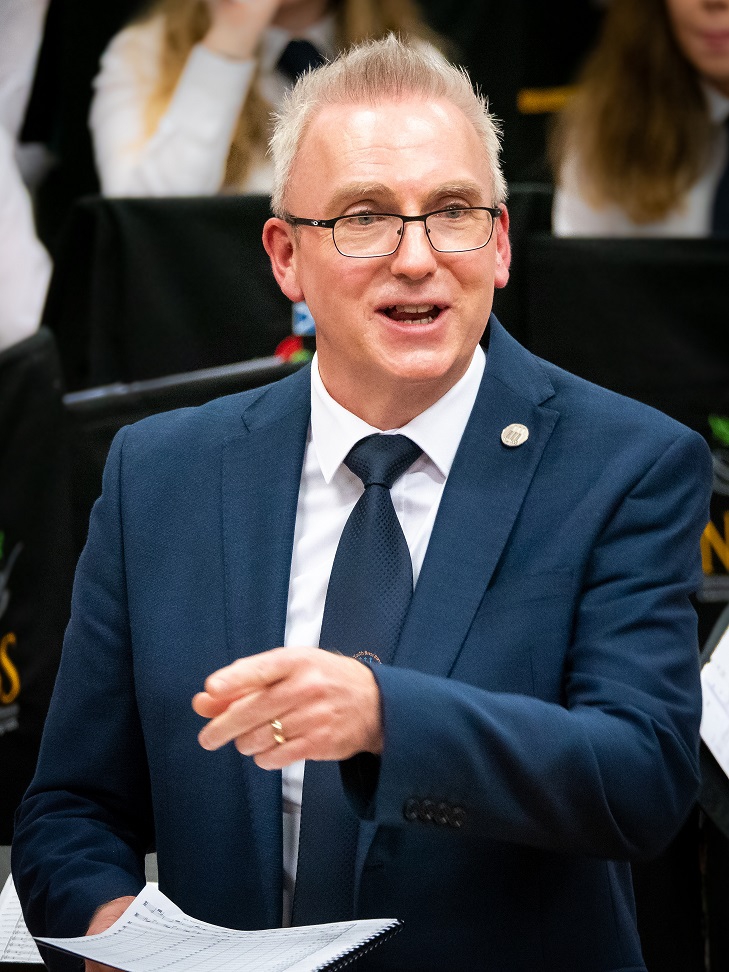